The Defense Base Act attorneys at Cantrell Green are among very few attorneys in the U.S. who understand the devastating effects of burn pit exposure on our troops, and on the military contractors who so dedicatedly serve our country.

For several years our DBA attorneys have fought to obtain workers’ compensation benefits for civilians working overseas who were made ill by exposure to the toxins released by burn pits. And for the last several years the government, the military, the Courts, the insurance companies, and even the employers themselves have tried to deny or downplay the horrific effect of burn pit exposure on human health.

But the fight for burn pit compensation may have a valuable new ally in the form of President-elect Biden, due a tragic loss in his own family.

President-elect Joe Biden’s son, Major Beau Biden, was a judge advocate general (JAG) officer in the Delaware National Guard. He was deployed via military aircraft for Iraq on Nov. 19, 2008, just days shortly after his father became vice president-elect. He was stationed with the Delaware Army National Guard at Balad Air Base, where the U.S. military burned approximately 140 tons of waste a day in burn pits.

Maj Biden worked as a civilian attorney with the U.S. attorney’s office in Kosovo. He returned from service and was diagnosed with stage 4 glioblastoma (an aggressive form of brain cancer). Eighteen months later he tragically died from brain cancer in 2015, at the young age of 46.

In a recent interview with PBS NewsHour, President-elect Joe Biden said that he believes the brain cancer that killed his son may have been caused by burn pit exposure in Kosovo and Iraq.

In that interview Biden stated that “Science has recognized there are certain carcinogens when people are exposed to them.” Specifically referencing burn pit exposure, he continued, “Depending on the quantities and the amount in the water and the air, [they] can have a carcinogenic impact on the body.”

How Biden Changed his Mind on Burn Pit Exposure

When Biden initially served as vice president in the Obama administration, the VA repeatedly took the stance that illness due to burn pit exposure “required more study” to determine a service connection. And, Joe Biden himself said he had been unaware of any potential link before reading an exceptionally telling book The Burn Pits: The Poisoning of America’s Soldiers, by former Army Staff Sgt. Joseph Hickman.

That pivotal book includes a chapter on the link between Maj. Beau Biden’s cancer and his burn pit exposure.  “There’s a whole chapter on my son Beau in there, and that stunned me. I didn’t know that,” said Joe Biden in the PBS interview.

Now, President-elect Joe Biden – like many other families of service members and civilian contractors – suspect that toxic burn pit exposure may have been responsible for his son Beau’s brain cancer.

In Biden’s speech in 2019 to the Service Employees International Union, he said he believes that his son’s cancer and subsequent death was due to “exposure to burn pits, in my view, [but] I can’t prove it yet.”

For thousands of veterans and military contractors who have also been stricken by cancer and other devastating illnesses after being exposed to the burn pits overseas, perhaps Joe Biden’s personal loss will help implement compensation they deserve and need.

While the VA still stubbornly states that there is not enough evidence that burn pit contaminants are the cause of troop illnesses when they return home, Leo Cruz, Biden’s Military and Veterans’ Issues campaign director has stated that the President-elect is ready to help burn pit exposure victims. And, in fact, Biden already has announced that he has a plan in place on this issue – which the previous administration did not.

Biden’s plan “includes expanding the list of presumptive conditions to include exposure to burn pits or other environmental toxins and increasing research dollars by $300 million to invest in better understanding the impact of [traumatic brain injury] and toxic exposures.”

Jeremy Butler, is the chief executive officer of Iraq and Afghanistan Veterans of America (IAVA). With some hope he has stated: “The fact we now have President-elect Biden is going to make it a lot easier to get something done. He is someone who understands in a way few civilians do.”

As experienced attorneys who have represented injured workers for more than 40 years, we continue to fight for civilians exposed to burn pits on overseas bases. We are among very few attorneys in Long Beach, Los Angeles, or anywhere in California or across the United States who not only understand but specialize in burn pit cases for defense contractors who were exposed to toxins.

If you or a loved one was a civilian working on a military base for a defense contractor overseas, and you were made ill by toxic burn pit exposure, our attorneys are here to help you in any way we can. 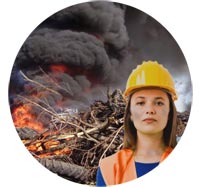